Eco tour of the Altai Mountains: a place of power right in the heart of the planet!

The smell of cedar, the sounds of mountain rivers, incredible clouds, dense fog, and breathtaking views - all of the amazing moments of the eco tour of the Altai Mountains cannot be described or conveyed through photographs. The collection of experiences of the TianDe team has now been extended to include all these miracles of nature, places of power and sacred destinations!

The participants of TianDe Team Travel spent seven unforgettable days from 9 September to 15 September right in the heart of the planet! The Altai Republic extended a warm welcome to the partners of the corporation from the Czech Republic, Russia, Poland, Kazakhstan, Moldova, Romania, Belarus, Georgia and Bulgaria.

The eco tour was headed by the holders of TianDe brand rights Aleksandr Elkin, Tatyana Polyakova and Andrey Povagin. 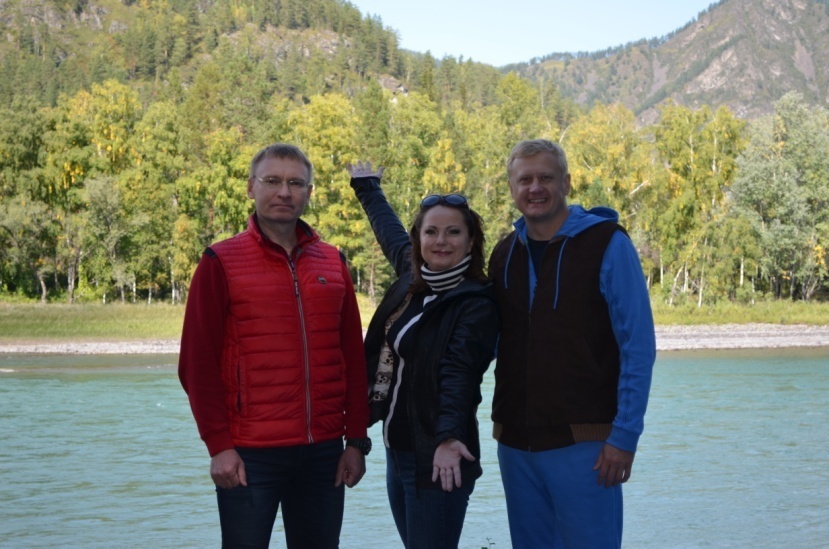 The successful top leaders of the corporation brought their teams.

CHOROVOD DANCE, A SLAVIC WEDDING AND TRADITIONAL UKHA SOUP ON THE FIRE!

The daily program was filled with engaging tours, a number of interesting meetings, new acquaintances and adventures. A colourful celebration that took place on the banks of the Katun River was one of the first powerful experiences. The top leaders from the Czech Republic and Poland became newlyweds and underwent the traditional ceremony of a Slavic wedding. The international TianDe team merged into one coherent body in the chorovod dance and became familiar with Russian traditions and customs. The Russian bread karavaj was, of course, not missing either. Guests were then able to taste the excellent fish soup ukha prepared on the fire and enjoy Altai drinks. There, the partners also received their first gifts from the company - plaids in the colour of the turquoise Katun River with "Altai - the heart of the planet" printed on them.


MARS IN THE ALTAI MOUNTAINS!

Waking up at sunrise and going on a long journey to behold mighty glaciers, extraordinary views and ... Mars! That is exactly what awaited the TianDe team on 12 September, when they beheld a true miracle of nature - the colourful Kyzyl-Chin Mountains, also called the Martian Mountains. This wonderful landscape is practically situated at the intersection of three countries: Russia, Mongolia and China. Before the partners reached the Martian Mountains, they had to "surmount" the highest point of Chuysky Trakt - Seminsky Pereval, at the altitude of 1717 meters. They saw one of the most beautiful confluences of the rivers Chuya and Katun and visited the Geyser Lake and petroglyphs (rock paintings). Altogether, the participants travelled more than 400 km in one direction. The Martian views were a key part to this trip and won over the visitors with their shades of red, yellow, green and blue. 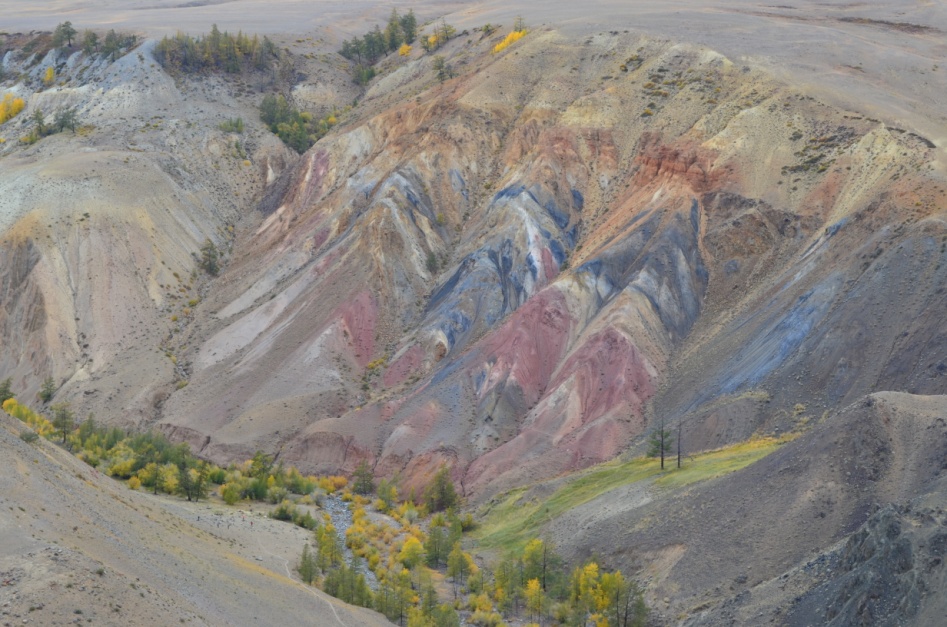 By no means did all of the participants dare to take part in the trip to the Karakol Lakes. However, those who took part in this trip were truly filled with emotions and got a big dose of adrenaline. The cascade of alpine lakes can be seen only after undergoing a demanding journey in off-road vehicles and overcoming several kilometres on foot. But the TianDe team managed without any problems! The beauty that the corporation's partners beheld was their reward for the obstacles they had overcome! 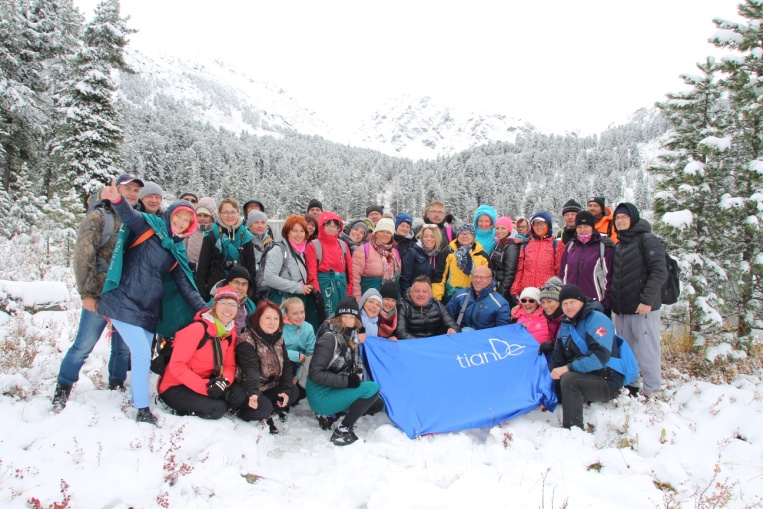 "THE YOUNGER BROTHER OF BAIKAL":

Not even the big waves struck fear into TianDe's partners. The strong, courageous and self-confident managed to make videos and take selfies during the boat cruise on one of Russia's most beautiful lakes. Lake Teletskoye, also called the "Golden Lake", is a unique natural complex of our planet. Virgin beauty, steep cliffs, and Korbu, the most famous waterfall of Siberia - our holidayers beheld all of this with their own eyes.

ALTAI'S PLACES OF POWER: THE TIANDE TEAM MADE A WISH!

The places of power played a separate and extraordinary role in our journey. We can call Altai one of the most sacred and mysterious places on our planet with a clear conscience. The local landscape conceals many secrets, and a colossal energy that helps make dreams come true is concentrated here.

The TianDe team had the opportunity to make a wish in one of the most powerful places of the Altai Mountains - the temple on the rocky Patmos Island, which is shrouded in a myriad of legends and folk tales. Those who want to reach this sacred corner must surpass a long hanging bridge. To all participants of the expedition, TianDe introduced special postcards into which they could write their goals, tasks and wishes. The experiences people have from expeditions to Baikal prove that the wishes come true!

Another remarkable experience awaited the partners on that day: they walked on the "Goat Trail" along the gorge above the Katun River. This place is also called the "Sartakpaja Gate". The views of the majestic mountains and vast space were breathtaking! These places of power evoked more and more emotions! 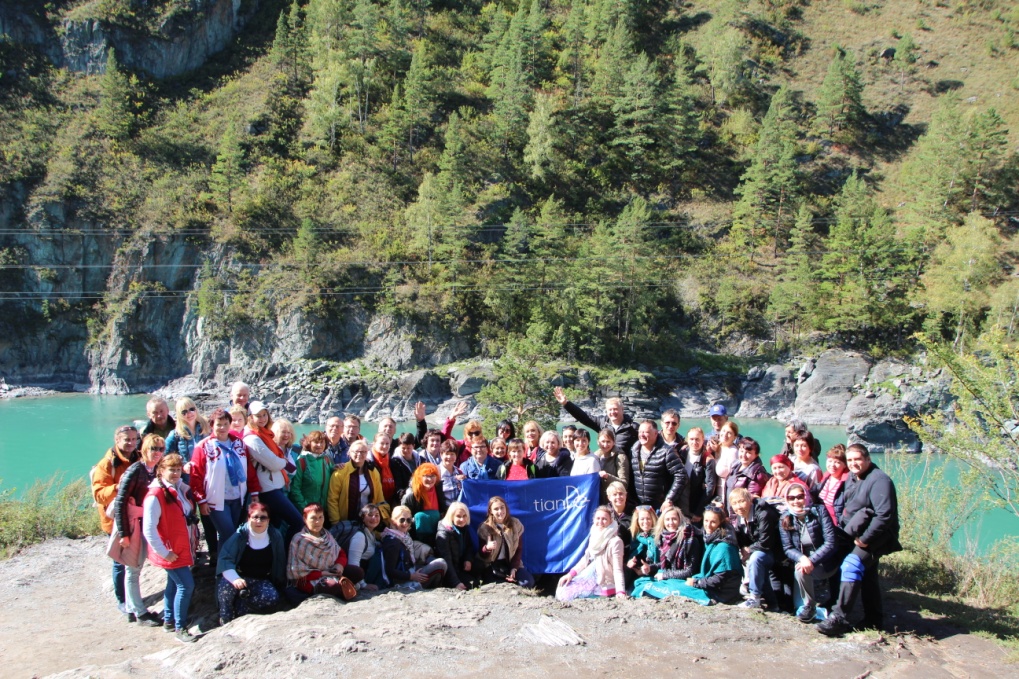 On the last day, TianDe managed to surprise its partners again. As a gift from the corporation, all TianDe Team Travel participants were given a replica of a painting by Nicholas Rerich, a well-known painter and traveller who devoted many of his works to Altai. Today, his paintings are not only in the National Museum of the Altai Republic, but also in the Tretyakov Gallery, a museum in New York and in private collections around the world. The paintings given to TianDe travellers have a special meaning - they reflect everything from the "path to happiness" to "real miracles". That same evening, the guests experienced the art of overtone singing in a live performance.

As Tatyana Polyakova said in her final speech: "The photos taken and videos made during these days will not remain only in smart devices, but in the hearts of the participants. Throughout the entire trip, the TianDeTeamTravel team travelled on the same ship and in the same direction and gained colossal energy." The holders of TianDe brand rights were delighted that they were able to spend this time together with the large international team in the home of the corporation and to show the strength and power of Altai! All participants of the eco tour expressed their wish to visit these places again and experience these unrepeatable emotions again!

All partners have the opportunity to spend a holiday with TianDe: the next stop is Turkey! Get ready for new adventures and new experiences! Join the team of the successful!

Have a look at the colourful photojournalism on the eco tour to the Altai Mountains here!

We developed the OBC (Online Business Centre) specifically for you. This revolutionary business system will allow you to achieve impressive financial results...

Why do thousands of people come to TianDe every day?

TianDe offers you a solid foundation for your business: well-developed technologies, unique product assortment, training, bonus payments, etc. This will amount to 50 % of your success...

A set of hi-tech instruments to attract new partners

The Online Business Centre provides you with effective instruments to grow your extensive customer network instantly and reach the product turnover results of your dreams...

More details...
Pursuant to the Act on Registration of Sales, the salesperson is obliged to issue a receipt to the buyer. Sales must be registered to the tax authority online; in case of a technical failure this must be done within 48 hours.